GAFA, BATX and operators on the hunt for data and AI

Champions of data collection, the GAFAs have developed powerful and lucrative technologies to exploit data. This success finances their massive development strategy in AI, through organic growth and acquisition of start-ups. The BATX, Chinese tech champions, are following in the footsteps of their American counterparts with different diversification strategies. However, the need for tighter regulation of these contested monopoly giants could reshuffle the deck. Operators that have been investing in services and networks until now, already have major assets to invest in the Data-AI ecosystem.

Since the very beginning, GAFAs have focused their strategy on the collection of public data in order to monetize this data and/or better target uses. Each has developed its own search engine platform, online sales, social networking or content offering to meet or create new needs. The innovative aspect and the simplicity of use have attracted millions and then billions of users.

Google, for example, with more than 2.5 billion active users per month and 74% of internet traffic from Android devices in 2019, collects both personal data (name, mobile number, date of birth, credit card) and usage data (applications and websites visited, location). Chrome, the world's leading browser (65% market share) also collects user data from mobile devices and desktop computers. According to the Vanderbilt University study, a passive Android phone with Chrome in the background communicates its location information 340 times a day to Google, representing 35% of the data sent. By comparison, iPhones in normal use send 18 bits of information per hour to Apple's servers compared to 90 bits per hour for Android phones to Google. Google collects more data from iPhone users than Apple itself. In addition to Android and Chrome, Youtube, Gmail, Waze and Google maps provide many opportunities to collect data.

Offering continuous improvement and revenues multiplied by 10 in 11 years

GAFAs exploit the data they collect to improve their algorithms and targeting technologies (Google, Amazon), their products and services (Apple, Amazon) or to generate advertising revenue (Facebook, Google). The more data GAFAs have, the more they train their machine learning models. The more accurate the data, the better the conversion rate and therefore the revenues: it's a virtuous and lucrative circle. By placing themselves at the center of market share and customer knowledge, GAFAs have gone from a cumulative turnover of $78 billion in 2008 to $773 billion in 2019 and a cumulative market capitalization of over $3.7 trillion. 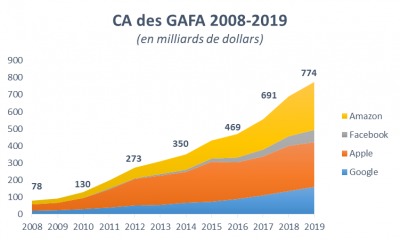 With their massive data and financial strength, GAFAs are investing massively in artificial intelligence

Benefiting from a powerful positioning and technological assets as well as comfortable revenues, GAFAs have a double strategy in data-AI: on the one hand they bet on organic growth (development of their own technologies and research laboratories);

On the other hand, they are adopting an external growth strategy (see graphs below). Acquiring start-ups has a threefold objective: to outpace incumbent players in their markets, eliminate potential competitors and attract rare skills. Some analysts speak of "acquisition-recruitment" rather than acquisitions. 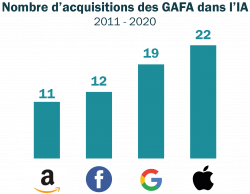 Apple is the GAFA that has acquired the most AI startups, including Siri in 2010 ($200 million), Turi in 2016 ($200 million), and most recently Xnor.ai ($200 million) and Voysis, a natural language processing platform. Google, with 19 AI-positioned startup buyouts since 2011, comes second. Its most emblematic buyout is of course the acquisition of DeepMind in 2014 ($400 million), the foundation of its organic growth and AI research lab.

Thus, according to estimates, Google has spent $4 billion since 2009 on the acquisition of AI companies, Apple $886 million, Facebook $1 billion, and Amazon around $871 million. Their selections were therefore radically different from those of operators, who gave priority to investments in networks and services. The monetization of data, although raised (e.g.: sales of subscriber data in the Yellow/White Pages era), has always remained a peripheral strategy.

BATX following in the footsteps of GAFA

BATXs ($329 billion in cumulative revenue in 2018, half the revenue of GAFAs and three times the market capitalization) were initially built by transposing the GAFA model into the Chinese ecosystem: Xiaomi is Apple's Chinese counterpart, Baidu is that of Google, Alibaba is that of Amazon and Tencent is that of Facebook. Their model, based on captive users, has enabled them to acquire a leading position in China.

With different diversification strategies in AI

Alibaba started by using AI for its services (robotization of its supply chain, chatbot...). Its recommendation engine was thus backed by machine learning to link visitors' interests to its media and entertainment platforms. On its Alibaba Cloud service, used for decision support or predictive analysis in the industrial, transport or medical sectors, it introduced natural language and image recognition in 2015. Alibaba's AI cloud platform analyzes 1.2 million hours of video and 550,000 hours of voice messages every day, and its Dian Xiaomi chatbot records 5 million voice or written queries per day.

Baidu is leveraging mostly autonomous cars and AI. Like Google, it uses artificial intelligence for the referencing of its search engine. Simultaneously, it is opening up the sources of its AI algorithms and offering deep learning infrastructure (PaddlePaddle) with different building blocks (NLP, video recognition, recommendation...) used by more than 1.9 million developers. As of December 2020, more than 230,000 deep learning models have been created using the platform.

Tencent initially gained recognition in AI through healthcare with online medical appointment management via chatbots, medical diagnosis assistance, cancer screening... It later expanded its AI offerings to other areas such as road transportation, voice recognition/synthesis and translation. The latest to get on board with AI, Xiaomi announced in early 2019 its intention to invest nearly $1.5 billion in artificial intelligence and Internet of Things. Xiaomi is targeting connected homes in particular.

The increasingly contested monopoly of GAFA and BATX could benefit operators

The recent fines imposed on GAFAs for lack of data protection, unfair competition or the recent reactions to the sharing of personal data between WhatsApp and Facebook, show that the market perception of GAFAs is changing. Discussions have even emerged to force GAFAs to make certain key data available (e.g. Google search engine queries, Amazon.com sales), just like legacy operators were once forced to open their network to new players. More than dismantling, it is therefore a tighter regulation that GAFAs may fear and that could shuffle the cards.

First of all, operators have a major advantage with mobile, extremely widespread: a 102% penetration rate and 5.124 billion unique customers in the world. The mobile and infrastructure data they can retrieve is valuable information, as we have recently observed with the use of anonymized data to assess travel during COVID.

Secondly, GAFA and BATX are today more focused on autonomous cars or health sectors than on the operator's business, with the exception of banking. They therefore leave a space for operators to seize.

Thirdly, there is a concern about the ability of GAFAs to manage "living" data. With their global approach, they increasingly need to rely on local players to ensure that the data is up-to-date, of high quality and well-labelled. This requires preparing and cleaning the data to be processed, having large samples, but above all knowing the sector and the business well to avoid bias and errors.

Fourthly, data held by GAFA and BATX are mainly open data indexable on the internet and those provided by users. Operators, through the customer relationship they have with large and small companies, have the opportunity to develop the B2B market and to accompany them in their production, marketing, monitoring and maintenance processes.

The implementation of AI in the real world requires learning models on a case-by-case basis, to label situations, images, emotions and to make predictions. For this, it is necessary to prepare and clean the data to be exploited, a model, time, large samples to work well and especially to be familiar with the sector and the business to avoid bias or errors. It is therefore not in their traditional business that operators will find the most revenue, as telecom markets are mature today. On the other hand, by choosing their diversification axes (Internet of Things, banking...) or B2B verticals, operators have the possibility to collect new and multiple data that will allow them to position themselves sustainably.

Although operators have neither the financial surface nor the investment capacity of GAFAs (774 billion in turnover, 3700 billion in capitalization and 84 billion devoted to R&D in 2019), they will nevertheless be able to capitalize on 3 success factors of GAFA in Data-AI:

Just as Orange, OVH, Atos, Deutsche Telekom or Siemens are cooperating in GAIA-X, for example, operators could replicate this approach in the AI field. Operators therefore have more than one card to play in the data-AI market.

Extract from our white paper : Challenges and advancements in the era of data and artificial intelligence