Back to News & Insights
News

Sofrecom Tunisia has earned a "FIPA Award", a distinction awarded by the county's Foreign Investment Promotion Agency (FIPA). This prize rewards Tunisia's partner enterprises for their economic performance and their ability to overcome conjunctural difficulties.

Sofrecom Tunisia recognized for its commitment

On Thursday, 11th June 2015, in Tunis, Sofrecom's Tunisian subsidiary was honored to receive the award presented His Excellency Mr. Habib Essid, Head of the Government, during the opening ceremony of the fifth edition of the Tunisia Investment Forum. Sofrecom CEO, Jacques Moulin, was present along with Siwar Farhat, CEO of Sofrecom Tunisia and Dominique Poulhazan, Sofrecom's IT and Offshoring Director. 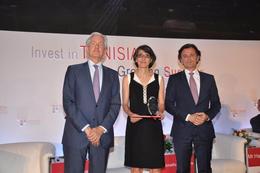 This distinction is awarded in recognition of Sofrecom Tunisia's dynamism and determination to develop its activities in the country and contribute to its economic development.

In his speech at the ceremony, Jacques Moulin said "We are honored and very proud to receive this FIPA Award which symbolizes our commitment to developing information and communication systems and to job creation in Tunisia."

Headed by Siwar Farhat, who is herself a trained engineer, the company's principal activity is to provide IT service and development platforms notably for Orange Group entities. This activity facilitates synergies and scale economies for software solutions integration and third-party application maintenance. The company also assists enterprises to optimize their maintenance and IS integration costs.

Sofrecom Tunisia has an outstanding track record in job creation. Launched with just 10 employees, its workforce will exceed 200 before the year-end and is expected to reach 400 by 2018. Its ambition is to exploit its expertise in digitization projects in Tunisia, notably in the fields of e-government, e-education, e-health and e-banking, and thereby contribute to the success of the "Tunisia Digital 2018" national strategic plan.